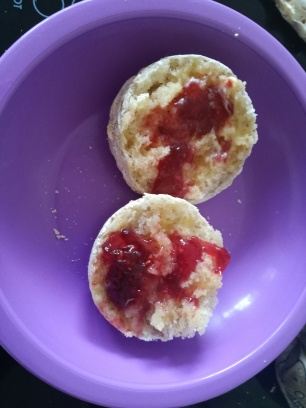 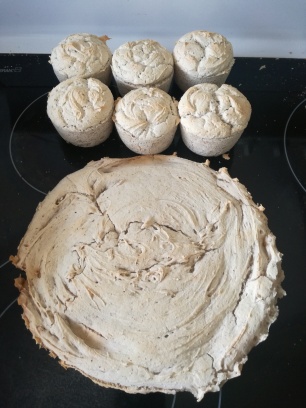 First attempt at gluten free bread – made English muffins and flat bread instead!

So if you read my last post about how we’re doing with the food allergies, then you’ll know that I’m trying to work out how we can go soy, dairy, gluten, and egg free (or at least reduce those last three). So today I made my first attempt at making gluten free bread. I naively didn’t research it online first and decided to gamely try my Linseed Bread recipe with the gluten free flour I’d picked up cheaply at an overflow store.

At the end of the first rise it was a completely different texture to my normal dough and really sticky (like thick icing). I realized that part of the problem was that the flour mix was intended for muffin making, not bread, and might not be strong enough. The tapioca / maize / rice flour mix had some thickeners added but I wasn’t sure if those included things like xanthan gum that might be able to hold the bubbles the yeast was trying to make. I gamely threw in some more gluten free flour and went on to the second mix & rise.

I did decide, while eyeing the mix nervously, that putting it in my bread mould might be a little hopeful. Instead I out it into a silicon muffin tray and spread the leftover mix thinly on a silicon flan dish. They did indeed rise again and I put them in the oven hoping for the best.

These cooked much more quickly than my bread does (in about 20 minutes) and came out with kind of a thin crunchy meringue type top. The flatbread was very thin and tasty with just butter (well actually rice bran spread); I think it might dry further over the next day or two and become more of a cracker. The muffins actually had a good texture inside and came out like English muffins (so bread-like rather than sweet muffins).

So not a total loss, yay!